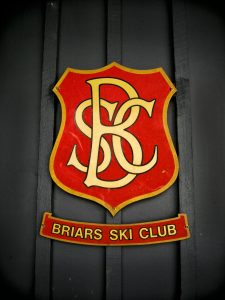 The original Briars Ski Club was formed in 1962 to build a ski club on a lease at Thredbo obtained by Doug Vanderfield. There were approximately 50 members mainly drawn from rugby, hockey and cricket players at the Briars Sporting Club in Burwood, Sydney and the Club was structured as a co-operative.

The lodge consisted of four small bedrooms with double bunks and two shared bathrooms, with a flat downstairs accommodating another four people. It had a comfortable wooden panelled living room with a big open fire. Over the next 40 years it provided a great source of enjoyment to several generations of members and their friends as a focus for snow skiing in winter, fishing and walking in summer, and to have a good time all year round.

The lease expired in 2004, and a new lease was purchased from Kosciusko Thredbo Pty Ltd for another 50 years. A requirement was that the lodge was rebuilt – obviously an expensive exercise with many of the old membership choosing not to be involved. A group of 16 old members and friends decided to fund a new lodge on the site which was built in 2006-2007.